Call a Professional to Remove a Wasp Nest

There are many people that are do-it-yourselfers, and I can say that I am one of them.  I enjoy the challenge, learning something new and most of the time saving a dollar or two.  When it comes to pest control, there are a lot of things that people can do themselves but working with wasps or hornets is not one of them.  It is important to always call a professional like the technicians at Northern Colorado Pest and Wildlife Control.   The technicians here are highly trained and well prepared for dealing with any king of stinging insect.  They come equipped with a bee suit, so they are not in harm’s way, and they have the ability to rid you of even the most aggressive bald-faced hornet’s nest. 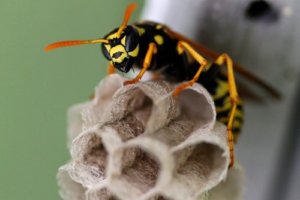 In Northern Colorado, the most common type of stinging insect is the European Paper Wasp.  These insects build open comb nests that can be found almost anywhere that provides at least some shelter.  Some areas include soffits, vents, decks, gutters, pipes, valve boxes, etc.  The next most common type of stinging insect that we encounter is the yellowjacket.  These insects are generally more aggressive than the paper wasps and they build enclosed nests that can be found under soffits, decks, or in wall voids, or even underground.  The last stinging insect pest that is common in our neck of the woods is the bald-faced hornet.  These insects are extremely aggressive and can even sting through a bee suit if it not on properly.  They are sometimes found on homes but are commonly found on trees.  They also have an enclosed nest that resembles paper mache like that of the yellowjacket.    We also see honeybees but do not provide a service for these insects as they are beneficial pollinators.  If customers are having problems with them, we always refer a beekeeper.

One major reason you should not attempt to remove a wasp nest yourself is because you could be seriously harmed if not killed, in the event you are allergic.  Like mentioned before you can sometimes save money by doing it yourself, but when it comes to dealing with stinging insects, you will become frustrated and spend more money in the long run than if you just call a local professional.  It is quite common for the technicians at Northern Colorado Pest and Wildlife Control to hear from customers that they sprayed the wasps or the yellowjackets, but they just came back.  This is because the nest was not fully treated, and you cannot treat a nest completely with some of the products at your local hardware store.  Some nests you can, and some you cannot, but do you want to put yourself in harm’s way?  Another problem that we hear about is someone trying to self-treat up on a ladder.  This can go horribly wrong once you upset the stinging insects as they can quickly attack you and during the commotion you may lose your balance and fall off the ladder.  So again, please call your local pros at Northern Colorado Pest and Wildlife Control for all your stinging insect needs!