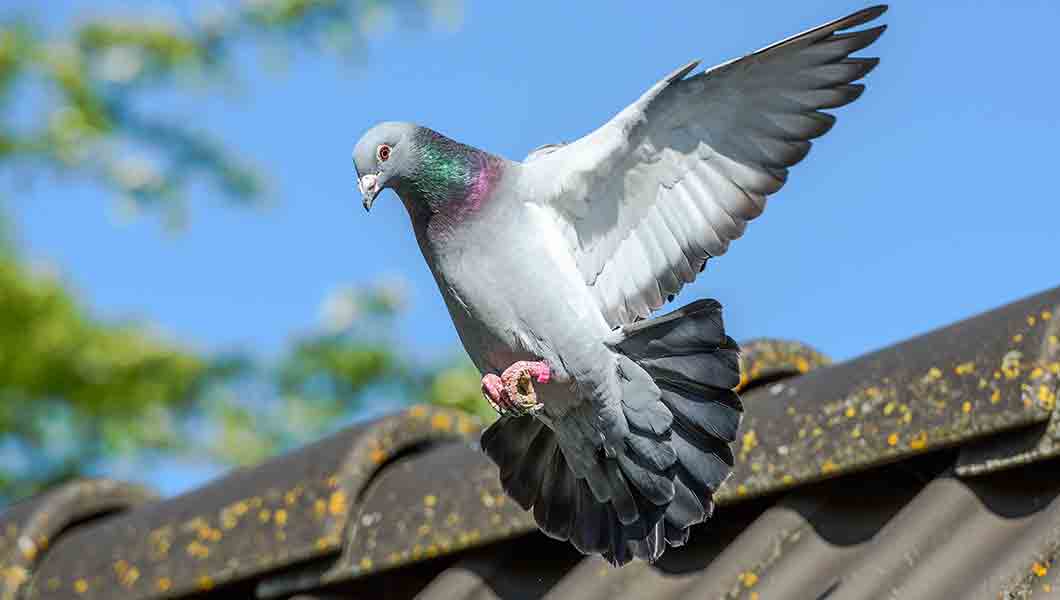 There are numerous bird species that call Colorado home, but only a few of these species are considered nuisance birds.  Birds of Colorado species include: Pigeons, European Starlings, House Sparrows, Cliff Swallows, Barn Swallows, and Northern Flickers.

Pigeons (Rock Doves) are very common and easily distinguishable bluish grey bird with two black bands on the wing and iridescent throat feathers.  Pigeons are one of three birds in Colorado that are not protected under the Migratory Bird Treaty Act.  Common problems associated with these birds are their waste, nesting on homes and buildings, and noise.  Another common problem associated with these birds is bird mites.  The mites will feed off the birds, but once the birds leave the mites can move inside.

European Starlings are stocky black birds with short tails and long pointed bills.  During mating season, they will have yellow bills and white spots on their bodies.  These birds can become a nuisance due to the high numbers of the individual birds in the flock and the mess they make from building nests.  They commonly nest in attics, on buildings and under ceramic tiles on roofs.  They are problematic in barns and warehouses and sometimes get trapped inside stores.  They have been known to mimic the sounds of other birds and they will lay their eggs in another bird’s nest.  They are an invasive bird and one of three birds not protected by the Migratory Bird Treaty Act.  Another common problem associated with these birds is bird mites.  The mites will feed off the birds, but once the birds leave the mites can move inside.

House Sparrows are another small, invasive songbird that outcompetes native birds for resources (food and nesting material) in Colorado.  They are mostly grey with chestnut colored areas on the chest and wings.  They are probably the most common song bird and are always on bird feeders and on the ground milling around for food.  They are the only other bird that is not protected by the Migratory Bird Treaty Act.  Like European Starlings, they make their nests around human habitation, nesting in eaves, rooflines, under roof tiles, attics, etc.  They outcompete other native birds by nesting earlier, more often and they use the limited available resources to do so.  Another common problem associated with these birds is bird mites.  The mites will feed off the birds, but once the birds leave the mites can move inside.

Cliff Swallows are a migrant inhabitant of Colorado and typically arrive here in early spring (April/May) to begin building their mud nests.  These birds have a square tail, metallic dark blue backs, and pale cinnamon rumps, with the face being rust colored with a white forehead.  Their mud nests are easily distinguished from that of a Barn Swallow because it is fully enclosed except for the entry hole.  These birds often build their nests under soffits on houses, apartments, and commercial buildings and they cause a massive mess with the feces and mud.  These birds also have an ectoparasite known as a swallow bug, which is in the same family as the bed bug.  If the nest is on a home or building, it is common to see these insects move inside once the birds migrate for the year and they begin to bite and or feed off humans.  The birds can also be quite aggressive once they have started raising their young.  These birds can be difficult to manage once they start nesting because they are protected by the Migratory Bird Treaty Act and once eggs are laid, or babies are in the nest, we cannot touch the nest until the babies leave the nest (fledge).

Northern Flickers are large brownish–grey woodpeckers with black scalloped plumage with either red or yellow feathers under their wings.  They do not act like most other woodpeckers, because they feed primarily on the ground, where they look for ants and beetle larvae.  Mostly migratory birds, the males arrive early in the spring to establish their territory and then they begin drumming to attract a female.  Drumming is when the bird repeatedly pecks on a surface, most often metal to attract a mate.  It sounds like a machine gun.  Most notable problems associated with the bird is from the drumming, or from the bird pecking holes in the side of a house or building to build a nest.  These birds are protected by the Migratory Bird Treaty Act, so all mitigation techniques need to be non-lethal unless you file for a Depredation Permit through the USFWS to begin trapping.

Migrations and Controls Options  for Barn Swallows and Cliff Swallows

There are multiple mitigation techniques for birds including exclusion, repellants, and trapping.

Exclusion can be done with hardware cloth, chicken wire, bird spikes, shock track, bird slide, bird netting and many other kinds of materials.  Although it is generally the most expensive option, it is also the most long–term solution to any bird problem.

Repellent options can be broken down into visual, noise based, and oral repellents.  There are oral grain baits that can be used to repel the flocks like Avitrol which are registered as a repellent but mostly work like a poison.  It can be used as a tool, but only with the utmost care.  Some cities within Colorado ban this type of repellent because it is indiscriminate towards non-nuisance birds and can cause secondary poisoning to other animals if they eat a bird that is under the influence or has died from the repellent.  There are a lot of noise making repellents on the market like squawkers, but we have not had any long-term success and generally try to steer customers away from these gimmicks.  Visual repellents can be used in a limited capacity for deterring Northern Flickers with streamers/flash tape but as with most repellents they are a short-term fix, and the constant use of them can cause any bird to simply ignore them.

Trapping is always an option, although in some situations it is very difficult because of state and federal laws.  Pigeons are by far the easiest to trap of the birds listed along with some of the starlings and sparrows.  Northern Flickers can also be trapped, but you will need to fill out and be awarded a depredation permit from the USFWS, which we can assist you with.

Any successful bird mitigation program will be two-fold.  First, you need to eliminate the nesting sites of the birds.  This will prevent the bird population from getting larger.  Again, this is typically done through exclusion.  The second part is to remove the nuisance birds if they have not already left on their own through trapping, or repellents.  There are so many different options with birds, and some are more expensive than others.  A NOCO Pest and WIldlife Control technician will be able to sort out these options and help you determine which option is best for you.  Again, prevention is always the best approach.  Contact us for more information.