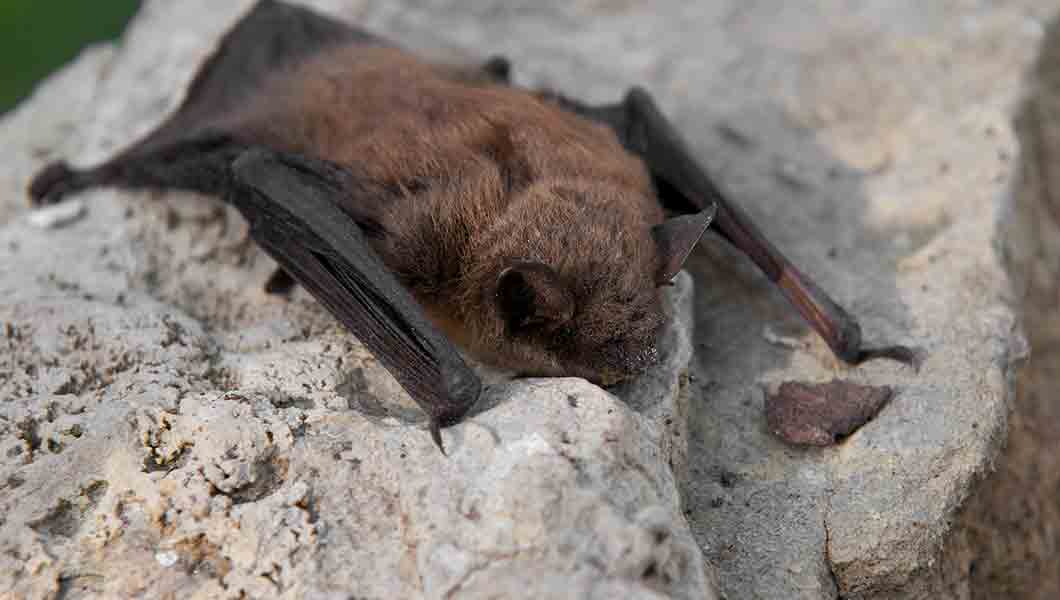 Within Colorado there are over 19 different species of bats. Some of which stay in Colorado year-around and hibernate, while some other bat species migrate in and out, or simply migrate through the state. Bats can be broken down into two categories; solitary bats and colonial bats. Solitary bats are like their name implies; they are alone. Colonial bats stay in small to large groups of up too 300+ individual bats. At NoCo Pest and Wildlife Control, we rarely get calls for solitary bat control, unless they are loafing by someone’s front door. Most of the bat calls we receive are from colonial bats with either Little Brown Bats (Myotis lucifugus) or Big Brown Bats (Eptesicus fuscus) being the species of concern. Little Brown Bats measure 98 mm long and weigh about 7 grams, whereas the Big Brown Bats measure 115 mm long and weigh about 17 grams. Bats can be quite difficult to distinguish between species and with most calls we receive the customer has not actually seen the bat. It is the bat waste (guano), that is found that prompts most of the bat calls.

Most of the bats we work with migrate into the state in the early spring (April/May), where they find roosting sites within homes and buildings. A roosting site is a location where bats sleep and where colonial bats congregate. These roosting sites can be in trees, attics, walls of your home or building, in bat boxes, caves, etc. In Colorado, we typically run into either bachelor groups (all males), or nursery colonies (mothers that either have young, or are expecting). When bats take up residence within your attic, chimney, walls, or business it can cause many different problems, both directly and indirectly. If you have a bat roost inside you might hear scratching, see the bats flying in and out for the exterior, see the guano, smell them (heavy ammonia smell), have bats flying around inside, or start seeing bat bugs. Bat bugs are an ectoparasite of bats, which feed off the blood of bats. These insects are relatives of the bed bug and are commonly miss-identified as they can move into the house and bite/feed off humans. Other problems associated with bats are loafing areas, which are areas in which bats take a break during the night when they are feeding due to them being nocturnal. Common loafing areas are around covered patios or front doors, where these areas closely mimic the habitat as that of a natural cave. Bat control problems are seasonal, as most of the bats begin to migrate out of the state at the end of summer or early fall (September/October). Some species of bats, mainly Big Brown Bats have been reported as over-wintering in attics.

From an ecological and conservation standpoint, bats are on the decline. Bats are very important to our local ecosystems and we strive to protect them and conserve them. We understand that bats have a scary reputation from what most people see on television and most people believe they are vampire bats and that they will feed off your blood. Rest assured, we do not have vampire bats in Colorado and the bats that we do have mostly feed of off insects like mosquitoes and moths. Another myth is that all bats have rabies. Although bats can and have tested positive for rabies, not all bats have rabies. To be safe, we never recommend touching a bat. If you see a bat during the day, it does not necessarily mean it has rabies, or that it is sick. It could have simply got caught out in a storm over night or is migrating through. It is always best to leave the bat alone for a day or two and let it leave on its own. If it does not leave, then seek the advice of a professional pest control company like ours. 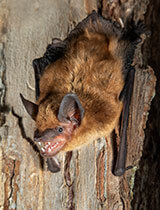 When we have bats loafing around a covered porch or front door areas, we have had luck with netting or exclusion to block the areas off to prevent them from loafing. Other common bat control approaches might include keeping lights on or turning on a fan in that area. Remember that bats are in those areas because it is protected from the elements.

If you have bats flying around inside the house, it most often means that you have a bat roost somewhere in the house and one of the bats or multiple bats got into the house by accident and cannot get out. We will come out and capture the bat(s) and release them and identify the bat roost.

We commonly find bat roosts on a house or building, and it can be quite difficult to mitigate, because of the fear associated with them from the customer. As we mentioned before, we strive to conserve bats and we do everything within our powers to not disturb the bats. When we locate the roost, we will try to determine whether it is a bachelor colony or a nursery colony. Sometimes it is impossible to access and therefore we assume it to always be a nursery colony. In these cases, we choose to do nothing until the fall, when the bats migrate away.

Once the bats are gone, we simply seal up the areas to prevent a similar situation from happening in the future. Yes, the bats will and do return to the same area year after year, so exclusion is by far the most important part of the solution. In a scenario where the bats are not going to leave on their own, because they are going to over-winter (hibernate), or in a situation where some of the bats have tested positive for rabies and the colony poses a public health risk. We will evict the bats from the attic using a one-way door technique, which allows the bats to leave the attic, but not allow them back inside. Once the bats are all outside, the one-way door can be removed and the roost can then be sealed off permanently so the problem doesn’t repeat itself. This approach is not our preferred method because it can put a nursery colony in great distress, because the babies might not be old enough to leave the roost and are thus trapped, causing unwanted mortality. This is something that we do not want, and these jobs can be quite challenging. With our tools we should be able to send a small camera into the roost to make sure that no individual bat is left alone or trapped inside.

Other indirect concerns with bats are bat bugs and the guano. There is a lot of information about both, but in short, the bat bugs can be treated very similar to that of bed bugs and you can find more information about that in that specific section of the website. The guano on the other hand can also be quite challenging. The guano can be both a nuisance because of the heavy ammonia smell and dangerous because it can harbor diseases like histoplasmosis. Histoplasmosis, is a fungus that can develop on the droppings and if disturbed, can become airborne through fungal spores. Inhalation of the spores can make you sick and it has similar symptoms of the flu. Histoplasmosis is mostly seen east of the Mississippi River, probably because of the high humidity that we do not see here in Colorado. In some cases, the amount of guano is so extensive that the ammonia smell is overpowering. We do offer a clean up service to remediate all the guano within the roost.

When we seal up a house or business for bats, we offer a full year warranty that you will not have bats back inside the house. It is important that the homeowner or building owner be aware of any new damage on the house that could allow bats back inside, whether it be from a storm, construction or aging of the house and deterioration. Prevention is always the best solution.